‘Central Pattana’, under its 5-year business plan, announces investments worth Bt14 billion to open ‘Central Nakhon Sawan’ and ‘Central Nakhon Pathom’ in the first half of 2024, aiming to develop cities with high potential and help partners grow across country 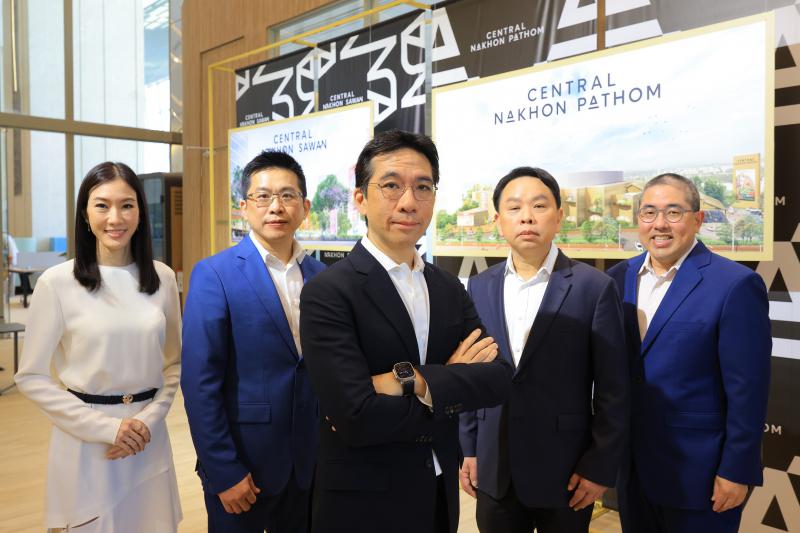 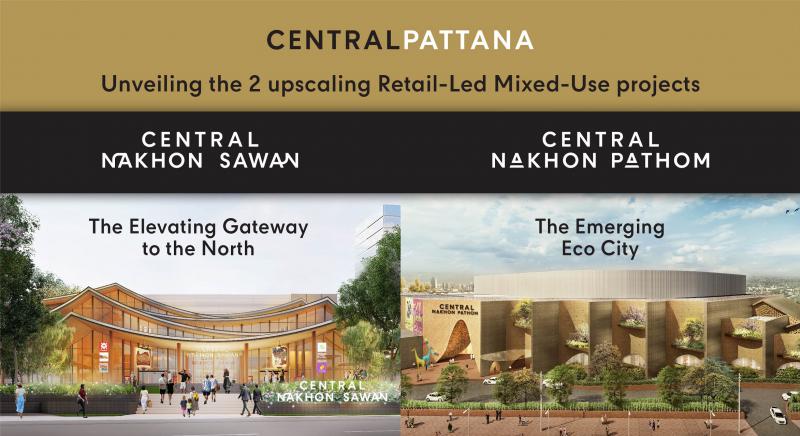 Bangkok – Central Pattana Plc., Thailand’s No.1 company in sustainable real estate development and developer of Central shopping centers, residential projects, office buildings and hotels across Thailand with the retail-led mixed-use development approach, under a five-year investment plan for 2022-2026, has announced it is investing over 14 billion baht in two mixed-used projects, namely Central Nakhon Sawan, slated for an opening in the first quarter of 2024, and Central Nakhon Pathom, which will be opened in the second quarter of 2024.

The two shopping centers will become new landmarks at the centers of Nakhon Sawan and Nakhon Pathom, upgrading economies and tourism industries of the two provinces, as well as improving the quality of life of local residents. In addition, the company is preparing a plan to support its business partners by increasing logistic efficiency and reaching new target customers who have an urban lifestyle and high purchasing power. The two new projects will also help strengthen the synergy within Central Group with a new concept. 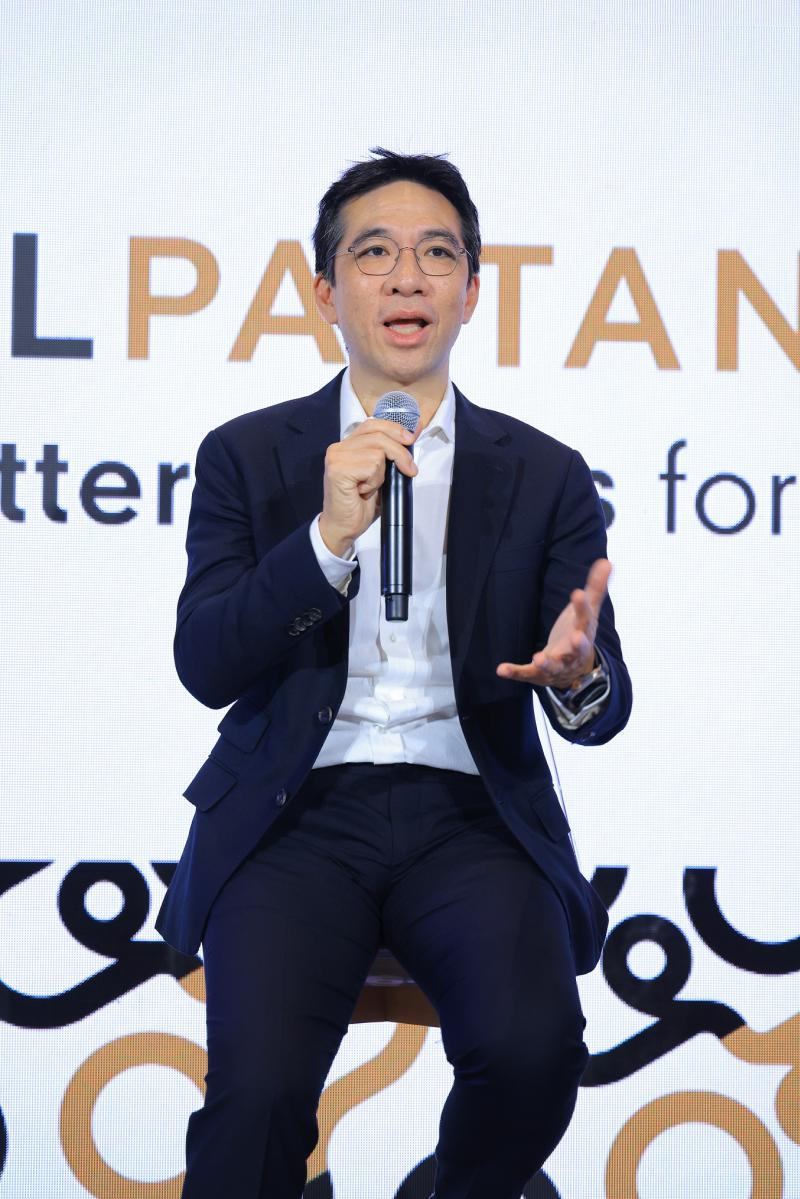 Mr. Chanavat Uahwatanasakul, Chief Development and Commercial Officer of Central Pattana Plc., said, “Central Pattana’s expansion of retail-led mixed-use development projects is under the aim to create a strong and sustainable ecosystem. Under our five-year business plan, there will be a total investment of over 120 billion baht in the core businesses, including the expansion of our projects to cover over 30 provinces across the country, reinforcing our role as the ‘place maker’ who taps into cities with high potential and improves lives of the local resident and communities, while at the same time supporting the businesses of our partners and driving the economy and development of the country.”

“We have seen great success with the mixed-use development project of Central Korat and have made progress on the shopping center components of other projects such as Central Ayutthaya, Central Si Racha and Central Chanthaburi,” he said.

According to Mr. Chanavat, the two huge projects are carried out under the concept “the upscaling of retail-led mixed-use development” which will connect project development with local communities and quality of life of the people in a more concrete way with three approaches.

Project development employs new methods and ideas, such as including sustainability in standards for new projects and the creation of master plans to connect the projects to neighboring components in adjacent areas, city landmarks and surrounding communities.

Project development will promote and utilize the potential of each city, with Nakhon Sawan as an economic center and gateway to the northern region and Nakhon Pathom as a satellite city. The projects will be the centers of growth in both locations in various aspects, including health and wellness, multi-generational lifestyles, nature, art and culture. They will also act as shared spaces for the local communities.

In launching a new project, Central Pattana considers purchasing power and lifestyles of the people in the area based on data-driven customer insight gained from The 1 and investments by public and private sectors. This allows a project design which can profoundly cater to customer lifestyles, enable partners to offer the right merchandise mix and create growth where the project is located. In addition, the Central Group provides synergy between businesses under new concepts which are developed along with the new projects.

Building upon successes in various projects across the country, CPN is able to accurately identify cities with high economic potentials. The new projects of Central Nakhon Sawan and Central Nakhon Pathom will target to create a new city, tap into new target customers who have an urban lifestyle and high purchasing power, and create new business opportunities for partners. 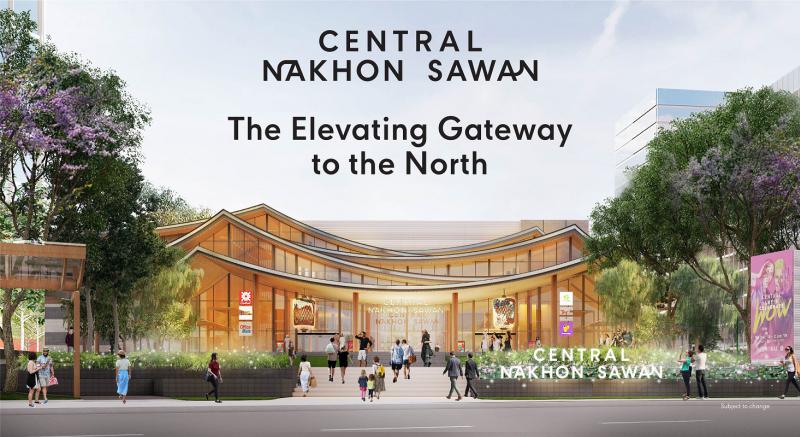 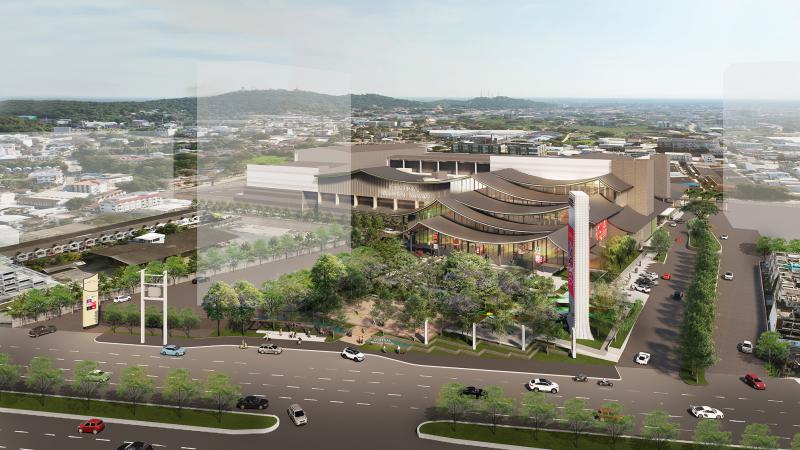 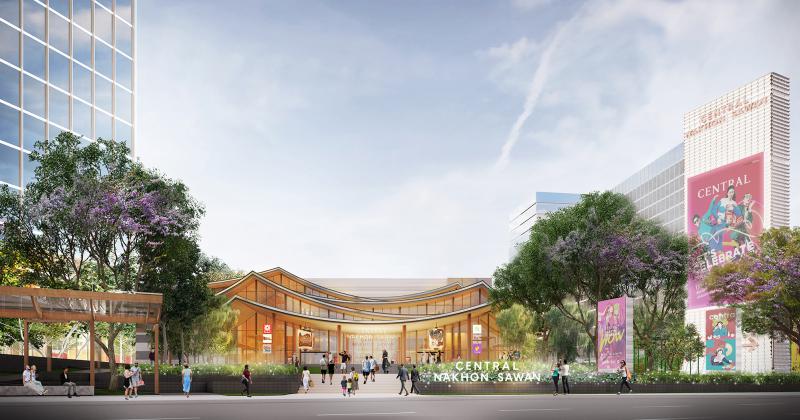 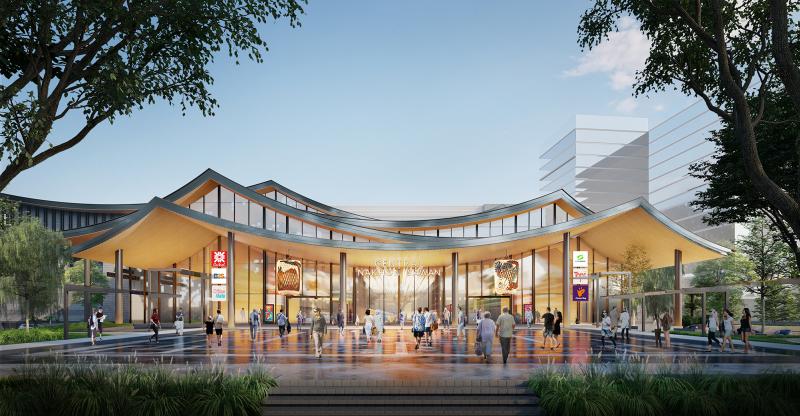 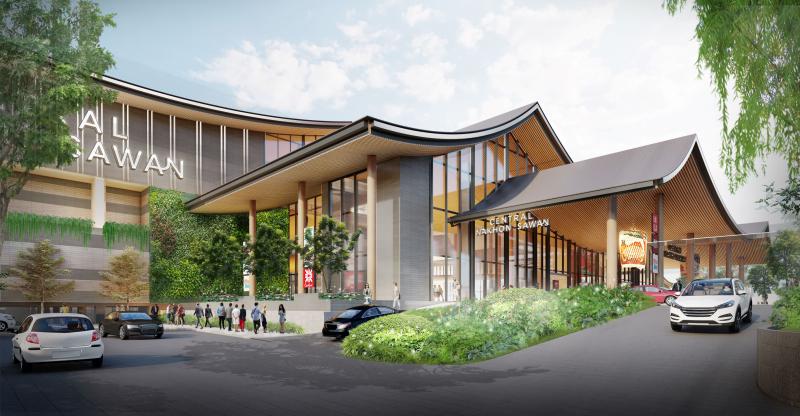 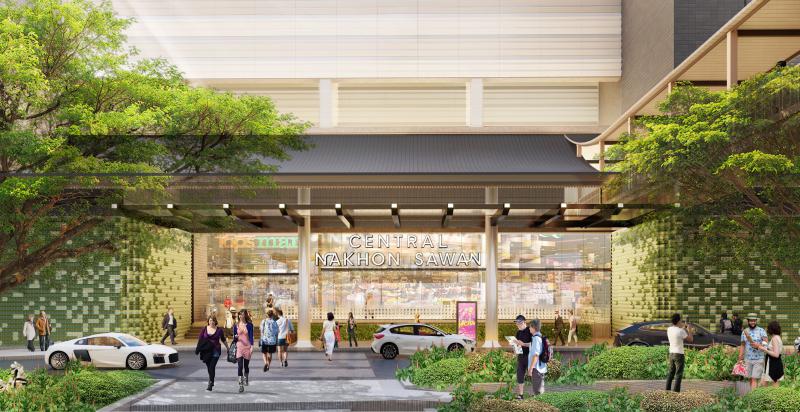 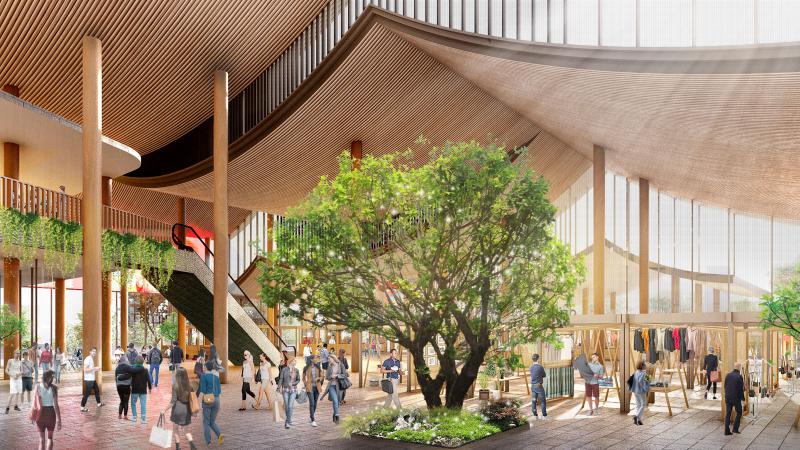 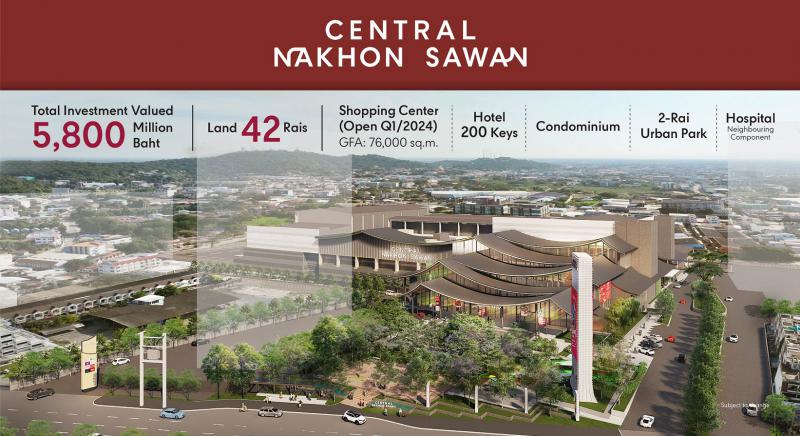 Central Nakhon Sawan is considered “the Elevating Gateway to the North” as it will help create a “new rising economic city”. The mixed-use project worth 5.8 billion baht is located on a land plot of 42 rai in the core of the city and is designed to cater to multi-generational communities. A shopping center with a gross floor area (GFA) of 76,000 square meters will be opened in the first quarter of 2024. In addition, there will be a hotel with 200 rooms, a condominium and a large urban park of two rai, while the project is connected to neighboring components such as a high-quality hospital under its master plan. 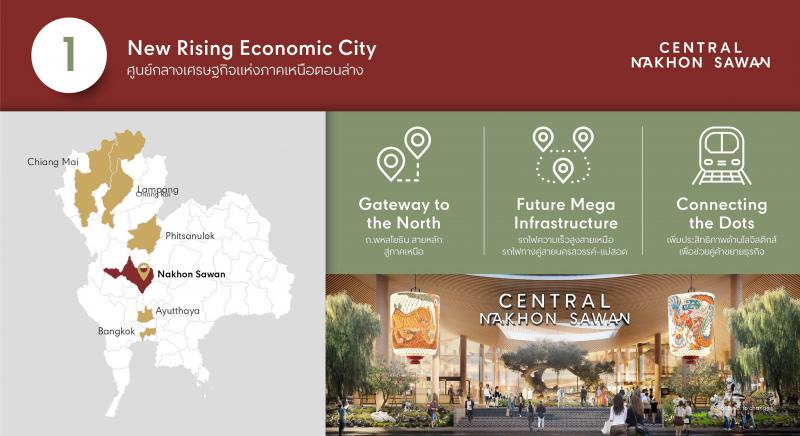 1) New Rising Economic City: An Economic Hub of Lower Northern Region
• The project is “the Gateway to the North” as it is located in the North-South Economic Corridor (NSEC) and is an area close to a number of mega projects such as the northern route of the highspeed train project, the double-track train route of Nakhon Sawan-Mae Sot and the northern expansion of the rail system.
• The project is also a logistic hub that connects various projects of CPN in the central and northern regions. By connecting the dots, logistic efficiency of partners will be increased, providing new business opportunities. 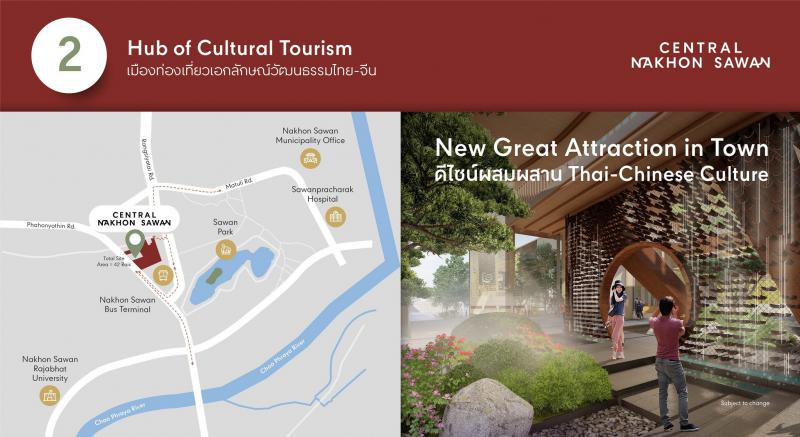 2) Hub of Cultural Tourism: A City with Unique Thai-Chinese Culture
The area known as Pak Nam Pho where Chao Phraya River originates has the third largest Chinese community in Thailand following Bangkok and Phuket, while the Nakhan Sawan province is known for its huge Chinese New Year festival. The design of Central Nakhon Sawan emphasizes the local essence inspired by Thai-Chinese culture, resulting in an attraction that will entice visitors to stop and spend time which will transform Nakhon Sawan into a tourist destination of its own. 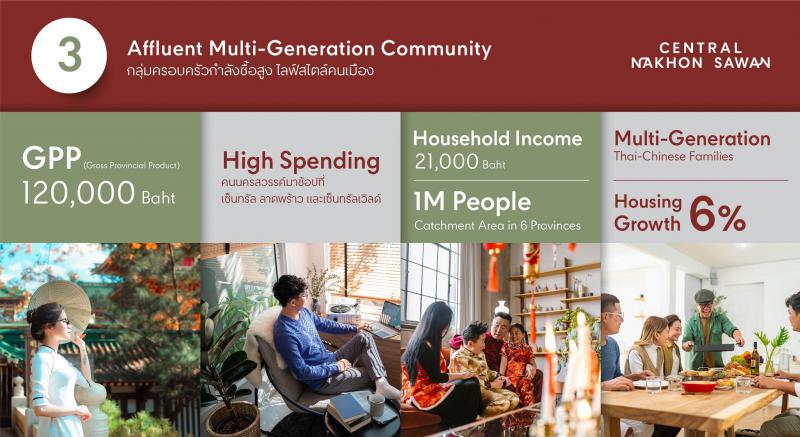 3) Affluent Multi-Generational Families: Thai-Chinese Families with High Purchasing Power and Urban Lifestyles
• Gross Provincial Product (GPP) of the Nakhon Sawan is over 120,000 baht per year, which is as high as that of Khon Kaen.
• Household income is over 21,000 baht per month, which is higher than Chiang Rai.
• Multi-generational Thai-Chinese families in the area tend to be involved in businesses. The wealthy people are business people who are used to urban lifestyles. Referring to the database, people from Nakhon Sawan like traveling and shopping at Central Ladprao and centralwOrld.
• Catchment area includes over one million people in Nakhon Sawan and nearby provinces such as Kamphaeng Phet, Uthai Thani, Chai Nat, Lopburi and Phichit.
• Housing growth in the area is about six percent in the past five years with an average housing price of 2.5 million baht. 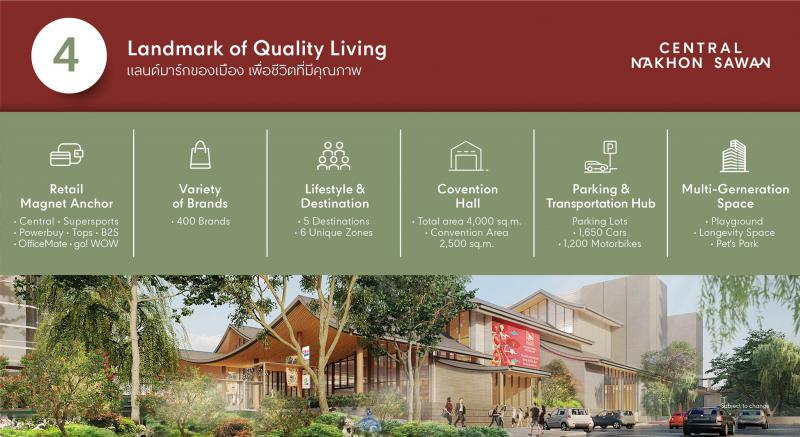 4) Landmark of Quality Living: A New Landmark for Quality Life
• A large urban park of two rai is designed to be a multi-generational space for everyone in the family. Highlights include a playground, a pet’s park and a “longevity hill” offering a vertical walkway, a running track and a bike track.
• The Wellness Zone in the project offers a fitness center, sport anchors and beauty services. It is designed to be connected to neighboring components such as hospitals.
• The design strives to represent Pak Nam Pho by utilizing the concept of “Chinese Meets Thai Culture” in its various elements.
• There are unique zones housing over 400 brands. The zones are designed with a holistic view and connected to each other. There is a Chinese Village zone which will be a food destination, a Chinese market, an authentic café and a supermarket all in one place.
• The project will also be a retail magnet with synergy within Central Group, which includes Central Department Store, Supersports, Power Buy, Tops, B2S, OfficeMate and Go Wow. 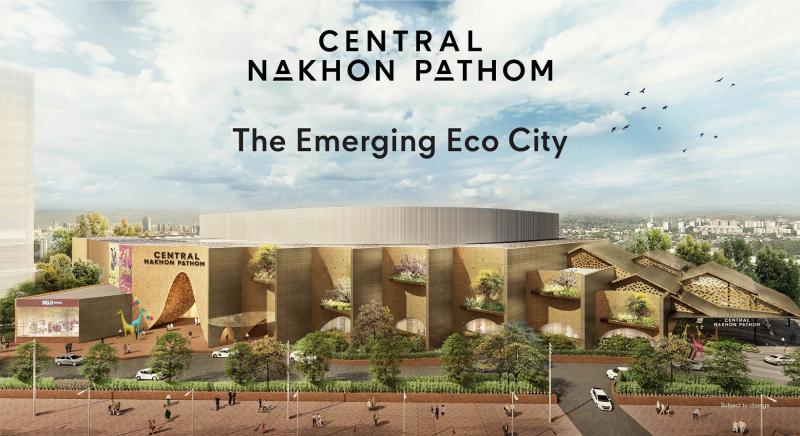 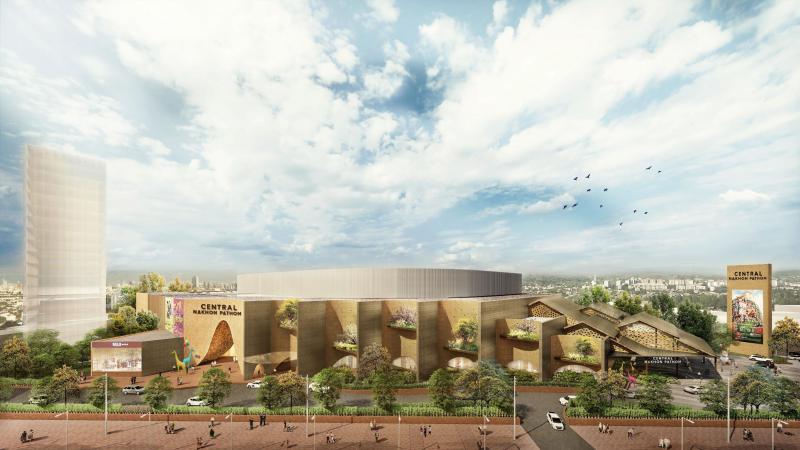 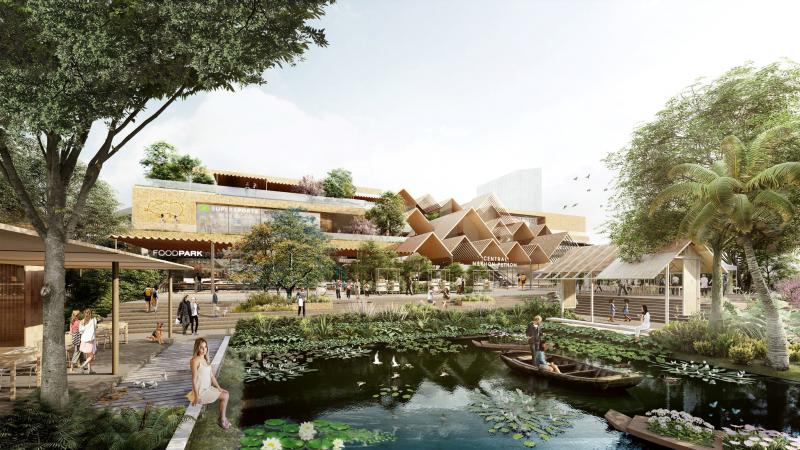 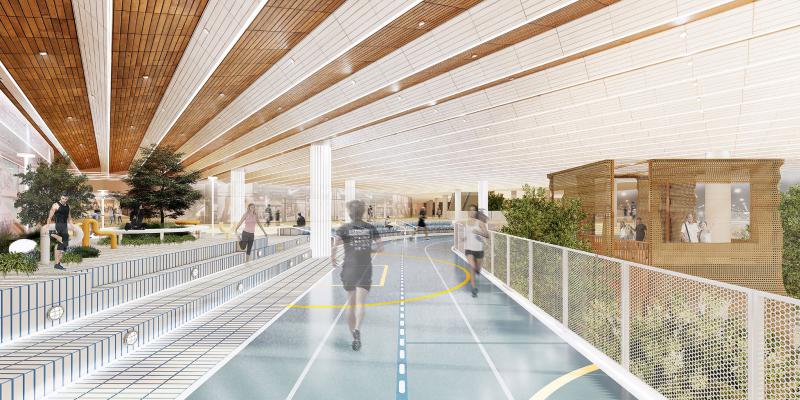 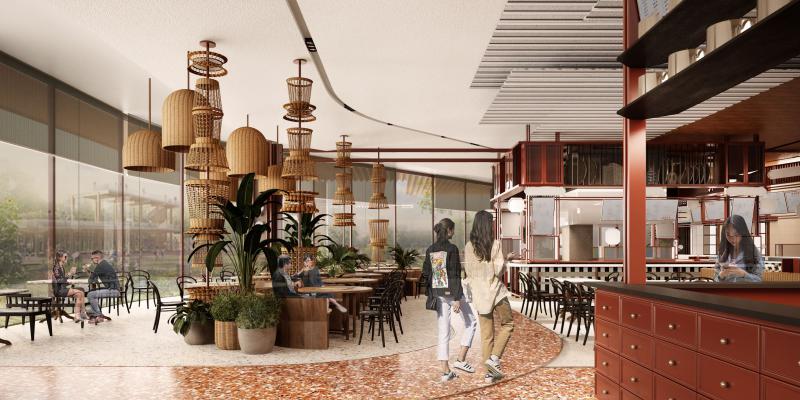 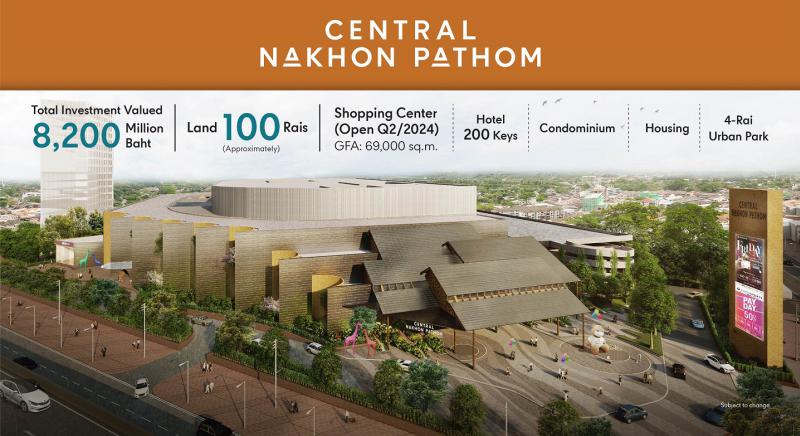 Central Nakhon Pathom, a sustainable mixed-use development project featuring the concept of “The Emerging Eco City”, will help create a new city and center of lifestyles for the young generations with attention to sustainability and co-creation space for everyone. The project has total value of 8.2 billion baht, located in a land plot of nearly 100 rai and consisted of a shopping center with a GFA of 69,000 square meters to be opened in the second quarter of 2024, a hotel with 200 rooms, condominiums, a housing estate with and a large urban park of four rai. 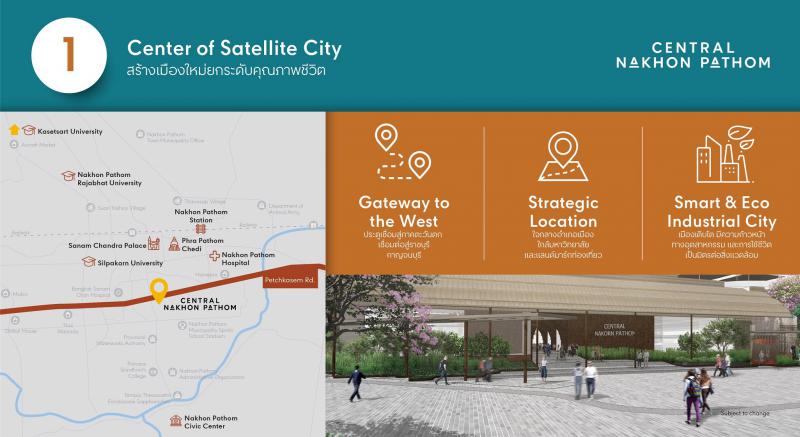 1) Center of Satellite City: Creating a New City to Elevate Quality of Life
• The development of this project is a strategic move for the company in order to expand to the western region with Nakhon Pathom as a gateway to nearby provinces such as Ratchaburi and Kanchanaburi.
• Due to its location that is near universities and important places, it will act as the center of the city and cater to local people who will no longer need to travel to Bangkok. It can be conveniently accessed by Bang Yai-Kanchanaburi motorway and Chonburi-Saraburi-Nakhon Pathom motorway.
• Nakhon Pathom province has a strategy to become a smart city and eco industrial town capable of maintaining the balance between the economy, industry, environment and community. 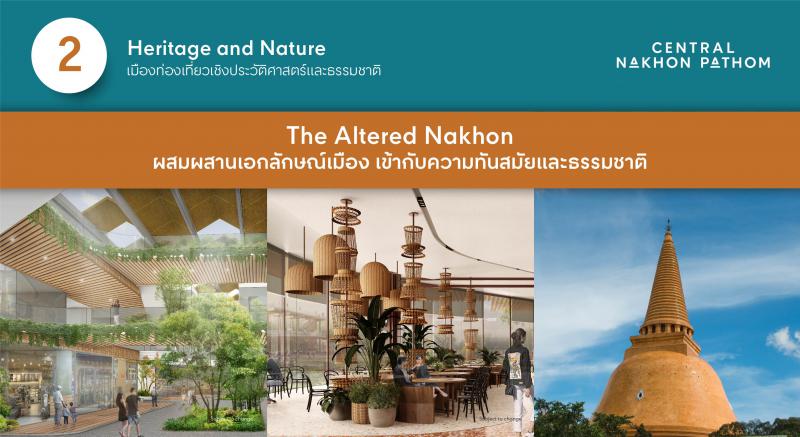 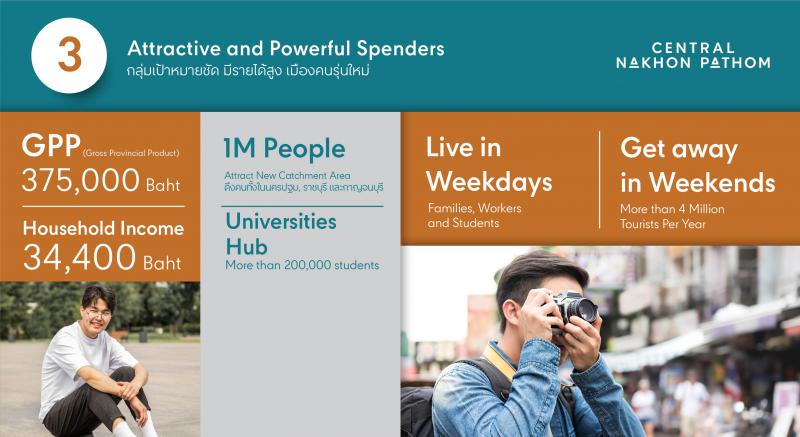 3) Young Generations and High Income
• Nakhom Pathom has a GPP of over 375,000 baht and is ranked among the top 10 provinces with the highest GPP. It is also seeing a good economic growth.
• Household income grew by five percent from the previous year and is currently at about 34,000 baht per month.
• Catchment area covers a population of over one million baht and can be expanded to cover Ratchaburi and Kanchanaburi.
• The project can cater to over 200,000 urban people, ranging from local residents, those working in Nakhon Pathom during the week, and students. As a hub of universities, many of its people are students who spend their time there in addition to travelling back and forth from the area.
• The project will also cater to tourists and visitors who come during the weekends. Statistics show over four million tourists, 97 percent of whom are Thai and the remaining three percent foreigners, arriving in the area each year. 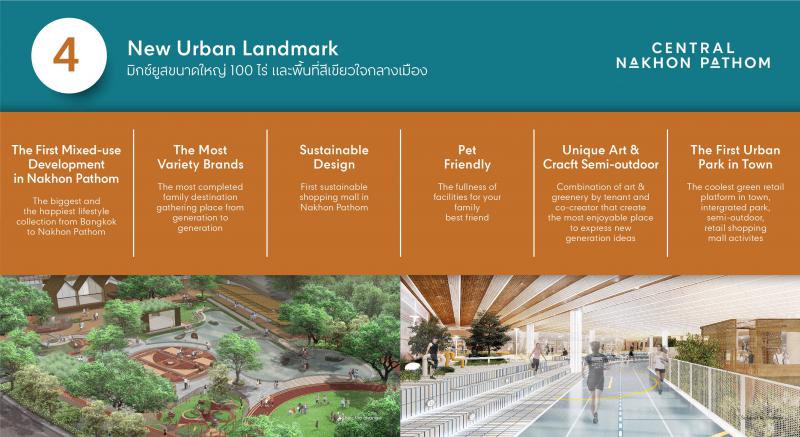 4) New Urban Landmark: The Largest Mixed-Use Development Project in The City with a New Model Which Integrates Semi-Outdoor Space with Green Area
• The project will be home to the first urban park of Nakhon Pathom. With an area of four rai, it is designed based on the successful semi-public area of Central Chanthaburi. However, the urban park of Central Nakhon Pathom will also facilitate activities of all family members and is home of the community leisure park, an art & craft area, and a co-creation space for students and young co-creators/ younger mind.
• It will be home to the first sustainable shopping center of Nakhon Pathom that meets the green building standard. It will have a sustainable design which employs natural light and a solar roof to reduce energy use, while an effective waste management system is in place.
• The project is led by business partners within Central Group, including B2S, OfficeMate, Power Buy, Tops Market, Supersports and Go Wow. There are other highlights such as Pathom Samosorn, an authentic lifestyle food destination with a semi-outdoor market, and Pathom Club which is a sport fashion destination connected to the park zone with a running track and a fitness center.

Central Pattana is committed to creating a sustainable ecosystem with a five-year investment plan worth 120 billion baht and a focus on retail-led mixed-use development to reinforce the strength in its core businesses, which are 50 shopping centers in Thailand and abroad, 17 community malls, over 70 residential projects, 13 office buildings and 37 hotels. The company is driven by the brand purpose of “Imagining Better Futures for All” by creating and developing quality places for people, community and environment while supporting the development of the economy and country. 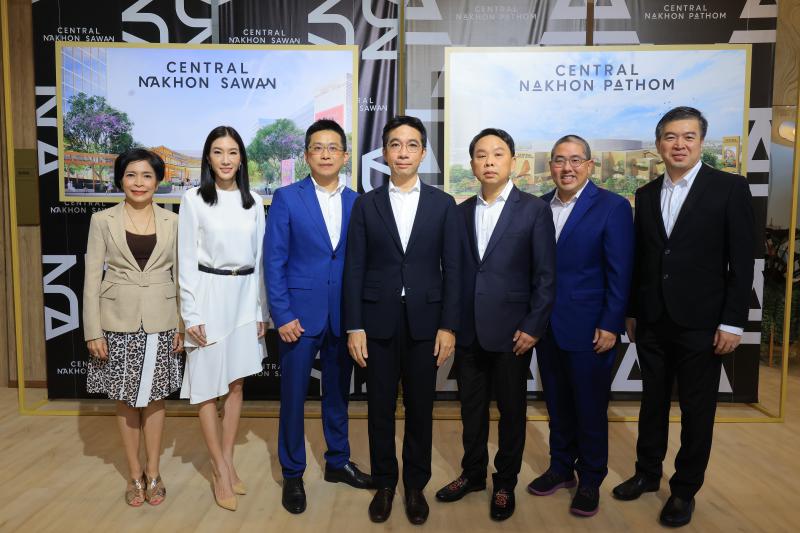