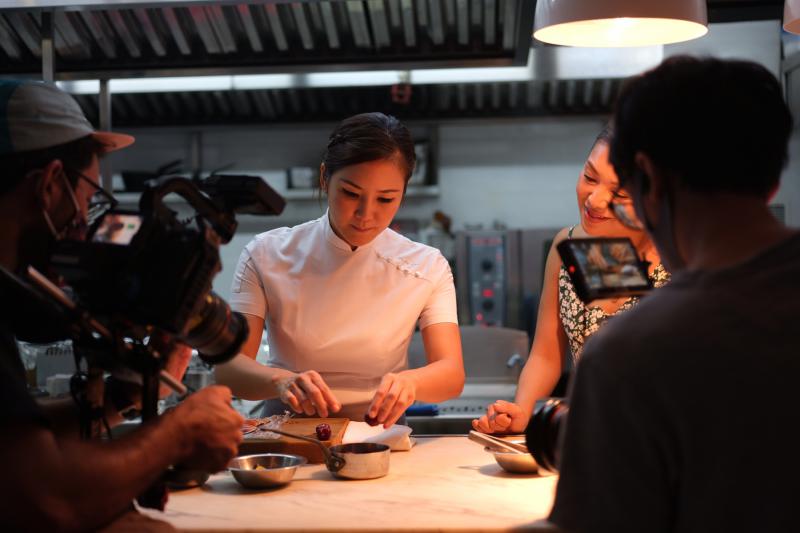 A treat for the senses, Hong Kong Chefs’ Playbook will get up close and personal with chefs Vicky Lau, Shane Osborn, Vicky Cheng and restaurateur Danny Yip as they bring us on a journey through the neighbourhoods of Yau Ma Tei, Wong Tai Sin, Tai O and Aberdeen to share some of their best kept playbook secrets in sourcing for the finest and freshest local produce influenced by the beauty of this global metropolis.

“As the culinary capital of Asia, Hong Kong hosts close to 70 MICHELIN-starred restaurants. With borders remaining closed, we hope to continue to bring Hong Kong closer to people around the world, this time, through the lens of our renowned MICHELIN chefs. Food is an important factor for our Southeast Asian travellers when it comes to picking a destination, which is why we are very excited and proud to collaborate with the MICHELIN Guide to showcase the neighbourhoods of Hong Kong through these talents as they share their re-interpretations of local flavours and how their favourite spots in Hong Kong have inspired them in their craft,” said Mr Raymond Chan, Regional Director, Southeast Asia, Hong Kong Tourism Board.

Nicolas Achard, Managing Director of MICHELIN Guides Asia and CEO of Robert Parker Wine Advocate shares, “When the MICHELIN Guide was expanding out of Europe into Asia, Hong Kong was one of the earliest cities recognised as having fine cuisines. Since 2009, Michelin and Hong Kong have marked many milestones together. As one of the most innovative and dynamic culinary hubs in Asia, Hong Kong is home to authentic Cantonese cuisine as well as cuisines from around the world prepared by the finest local and international talents. We hope to capture the flavours of this passionate exchange, and of the people behind the scenes, to give viewers a taste of what they can experience when they visit Hong Kong in the future.”

To showcase the vibrancy and diversity of Hong Kong’s culinary scene, each talent featured will unveil their individual playbooks based on their unique culinary background and finesse. As they explore these neighbourhoods, these featured talents will also share their inspirations, culinary secrets and tips that will uncover hidden jewels in these local neighbourhoods and their affinity to these places while discovering new places along the way. 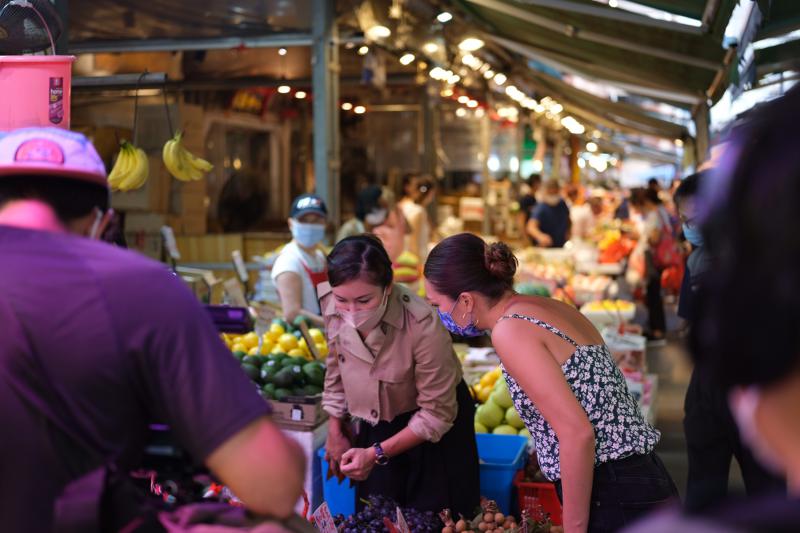 Asia’s first and only female chef Vicky Lau of two-MICHELIN-starred Tate Dining Room, honed her talent abroad and returned to Hong Kong to pursue her culinary career. Chef Vicky will be bringing viewers around the neighbourhood of Yau Ma Tei, which is a feature of HKTB’s latest West Kowloon neighbourhood campaign aimed to boost interest in the authentic local cultural aspects of West Kowloon.

According to Vicky, Yau Ma Tei is a side of Hong Kong where many chefs visit on a regular basis. “This area is where the old meets the new; with so much to discover especially if you are looking for something authentic and truly Hong Kong.  It is a heaven for food lovers as this is where we find gadgets, ingredients and delicious food but there’s so much authenticity to offer. For instance, the Yau Ma Tei Fruit Market (also known as Gwo Lan) is a well-known Hong Kong historical landmark, where there is an abundance of fruits - many interesting ones that sometimes we do not get to enjoy or encounter daily. The pandemic has greatly affected overseas shipment, but I see this as an opportunity to discover and use more local produce for my creations. I am really excited to show the side of Yau Ma Tei, especially from a chef’s perspective!”

Once reserved for the crème de la crème of restaurants in Europe, the renowned MICHELIN Star rating system now stretches across the globe as culinary art continues to grow with talents discovered and recognised across various cultures and cuisines. When the MICHELIN Guide debuted in Hong Kong in 2009, it awarded 31 stars to 22 restaurants. Today, Hong Kong is home to a total of 95 MICHELIN stars awarded to 69 restaurants.

As the world continues to battle and does its part to fight the Covid-19 pandemic with further travel ban extensions, HKTB and Michelin aim to spark culinary inspiration whilst enabling audiences around the world to indulge in local neighbourhood tours and reminding them of what awaits them in Hong Kong when travel normalises.

Each episode of Hong Kong Chefs’ Playbook will be released weekly on the social media channels of Hong Kong Tourism Board and the MICHELIN Guide from 21 September 2021 onwards. Start tantalising your wanderlust and taste buds by following @DiscoverHongKong and @MichelinGuideWorldwide on Facebook.

Read on for more stories from the talents of Hong Kong Chefs’ Playbook. 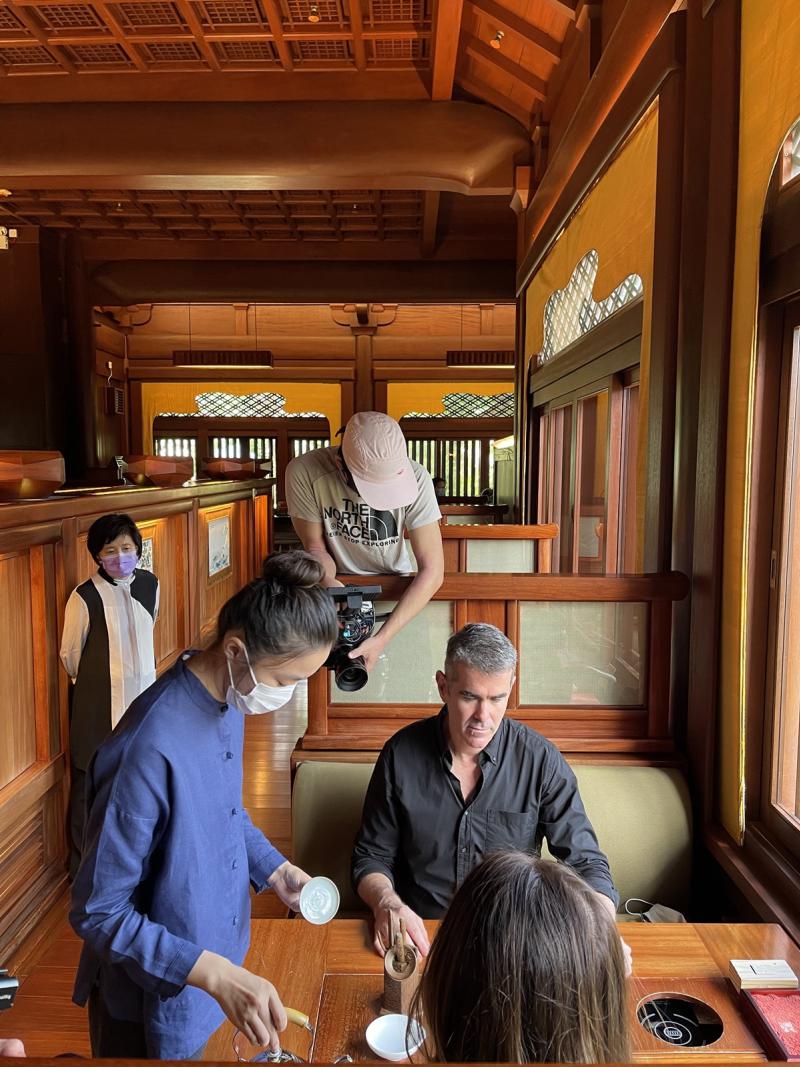 Bringing viewers through Wong Tai Sin is internationally renowned Australian chef Shane Osborn who received his first Michelin stars in London and moved to Hong Kong to establish his solo one-MICHELIN-starred Arcane Restaurant. He shared that sourcing locally is very important to him and his team at Arcane, “Not only do we get the freshest ingredients, we are also supporting the local farming community.”

As an expat, Shane constantly discovers new places in Hong Kong. His first time in Chi Lin Nunnery, Shane expressed that Hong Kong is a destination that provides both the bustling city and serene nature experience. “I was blown away by the Chi Lin Nunnery, the tranquillity of this area surprised me the most, especially as it’s so close to one of the world’s most heavily populated districts.” 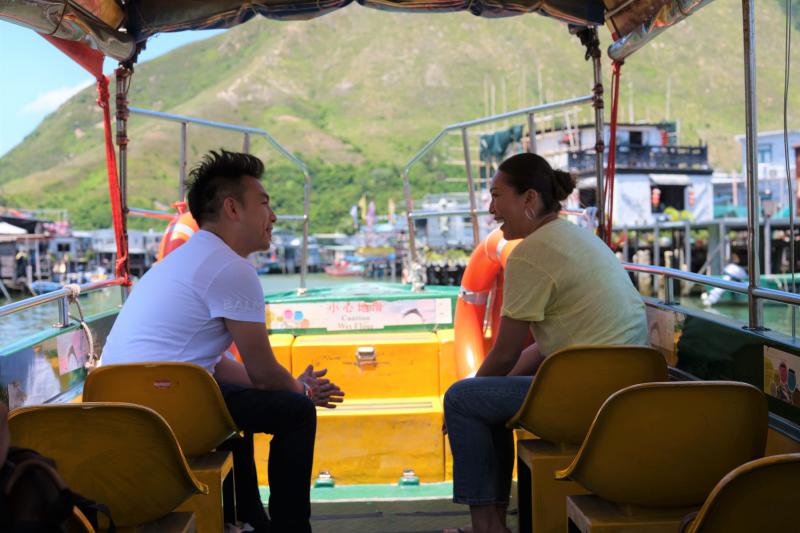 Known for his unique Chinese-French cuisine, Chef Vicky Cheng of one-MICHELIN-starred VEA also returned to Hong Kong to pursue his career after living abroad. Through this video series, Vicky Cheng hopes that people visiting Hong Kong can appreciate not only the variety of excellent food, whether it’s street food or from Michelin starred restaurants, but to also appreciate what Hong Kong has to offer in its beauty of its landscape.

Vicky echoed the sentiments of Shane Osborn. “One of the most beautiful things that I really enjoy about Hong Kong is that one minute you are in the centre of a financial district, and 15 minutes later you are the in middle of a forest, hiking with nothing around you. This is truly the beauty of Hong Kong as we are in the centre of many great cities and countries around us.  I hope visitors can also see what I see; through the lens of someone who was born here, lived abroad and came back; what’s special about Hong Kong, the places that I like to go, things I like to buy and ingredients I like to cook with.” 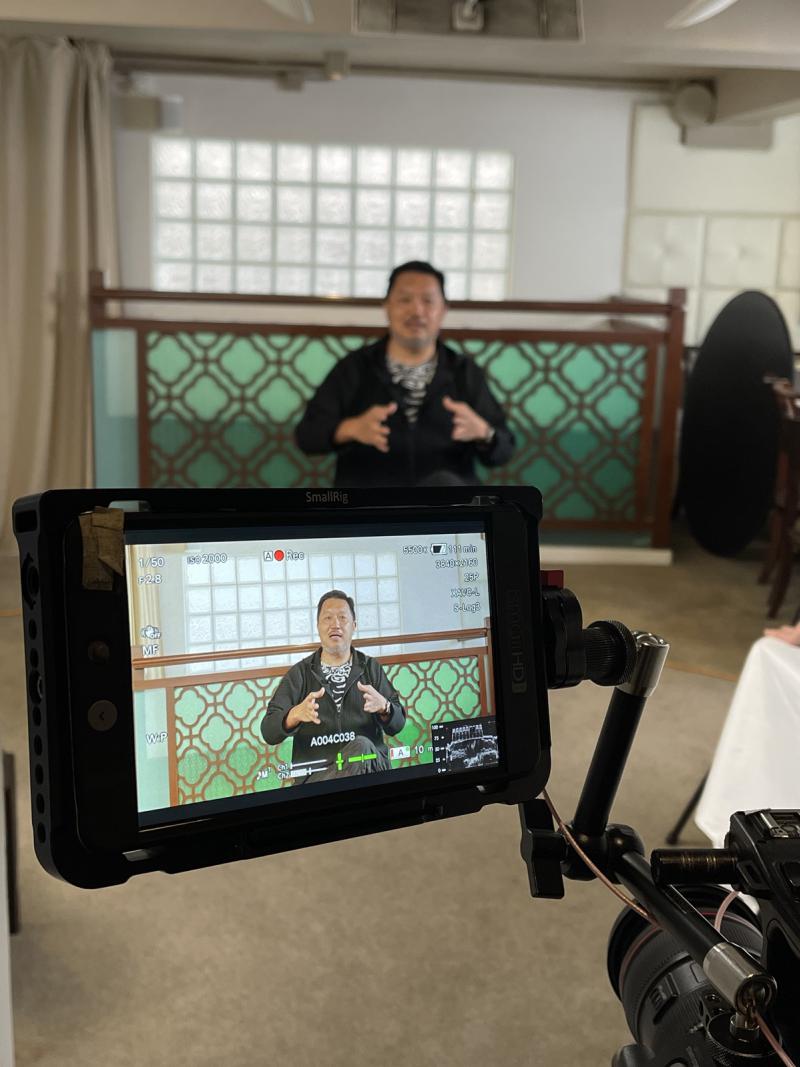 Last but most definitely not least, restaurateur Danny Yip, whose iconic one-MICHELIN-starred restaurant The Chairman is known for redefining Cantonese cuisine using local ingredients will bring viewers on a journey through Aberdeen. Through and through Hong Konger, Danny loves walking around the city on foot. “When we explore Hong Kong’s neighbourhoods on foot, we can feel the beat of the city and be able to see what’s in between tourist spots. Those in-betweens are hidden gems that are often the most memorable. That is why we use locally sourced ingredients, products from local condiment stores and seafood from local fishermen as much as possible.”

A homegrown restaurateur, Danny has seen many talented young chefs emerged in the past decade, wowing diners with new ideas and flavours. “Being a chef has eventually become a cool thing in the city. They are well connected with other parts of the world, socially active and ready to change. The culinary scene in Hong Kong has never been this vibrant and full of energy. I hope that it will stay that way: diversified, personal, creative, and interesting.” 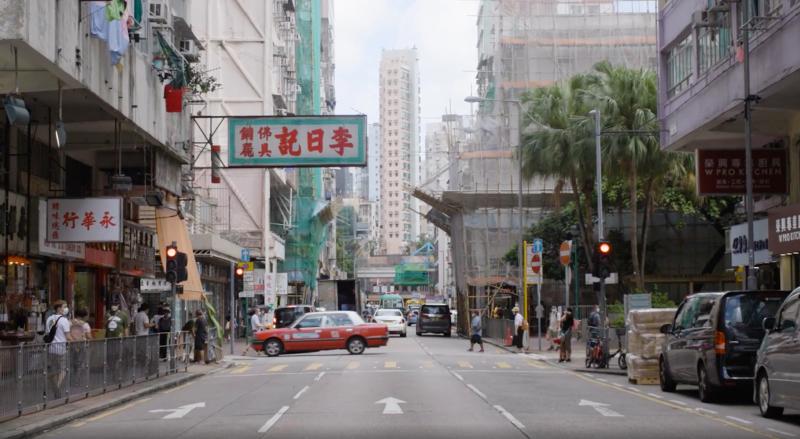 In the first episode of the four-part series, “Hong Kong Chefs’ Playbook”, Lau, together with host Debbie Wong, take us on a trip through Yau Ma Tei, the bustling historical district in the heart of West Kowloon. It is the perfect escape for every chef-at-heart as the pair guide viewers in discovering local hidden gems that stand as the backbone of many chefs and restaurants in Yau Ma Tei. 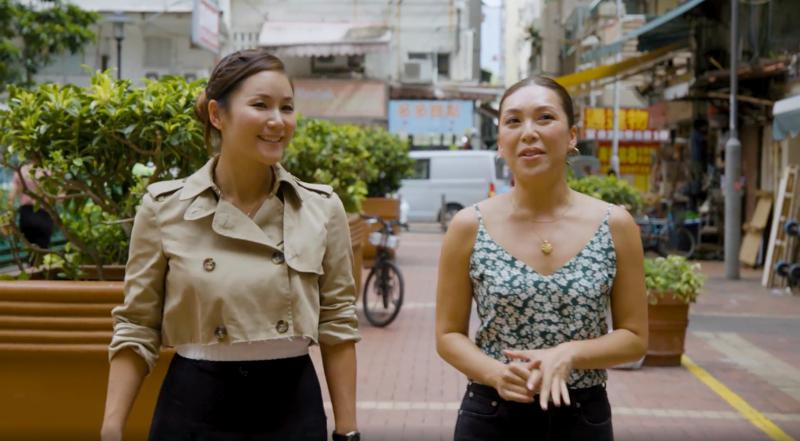 Before we get to cooking, we first need the essentials.

Dubbed as a cook’s paradise, Shanghai Street is swamped with stores brimming with pots, pans, and almost anything one might need in a kitchen. Known for its quality and affordable price points, this street is heaven for anyone that loves to cook.

Walking along the street, you’ll find shops dedicated to equipment for different kinds of food. From all-wooden utensils to stainless steel equipment, there’s a store for every cook, be it a dim sum master or a pastry chef. Shops also house top-of-the-line gadgets for mixing, blending, frying, and other machines you want in a kitchen or restaurant. 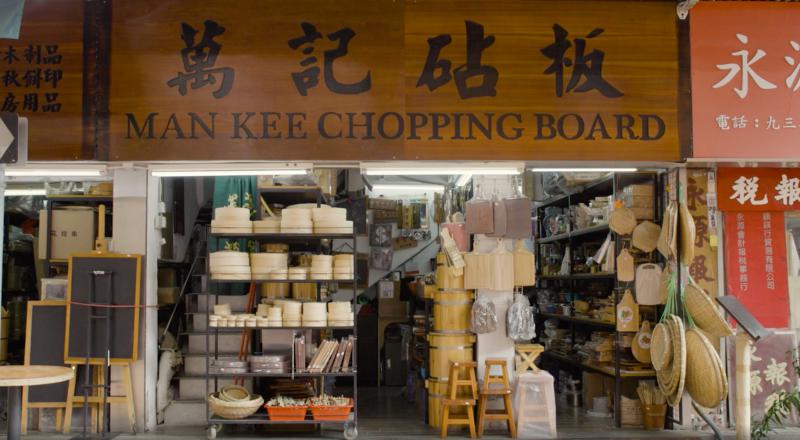 A key destination for every chef on a trip to Shanghai Street is Man Kee Chopping Board. The establishment has been around for over half a century, offering quality and custom-made chopping boards made from a variety of woods to suit the needs of any cook. The wood acts as a sponge absorbing each hit of the knife, making it safe and ideal for chefs that do a lot of chopping.

Owner Mike Au shares tips on the proper maintenance of the wooden boards, gifting one to Chef Vicky which she could use at her restaurant. Such wooden chopping boards aren’t as popular as they used to be, so Man Kee’s is truly a hidden gem for those who still appreciate the benefits of a good block of wood for their cooking.

Now with all the right tools, it’s time to gather the ingredients. 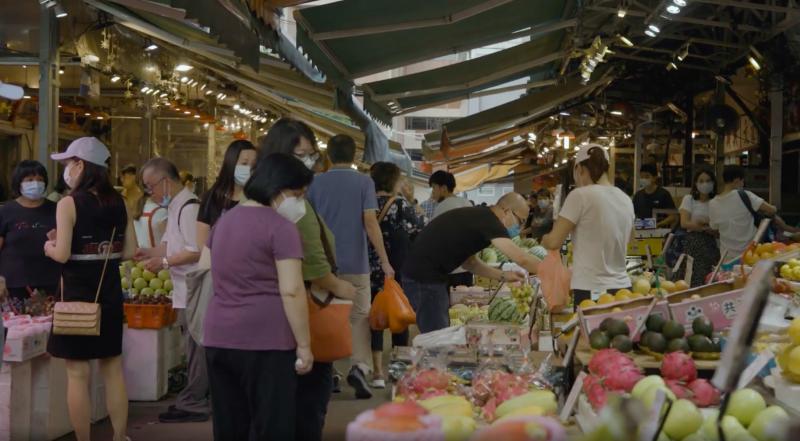 Just a few minutes down the road from Shanghai Street is the Yau Ma Tei Wholesale Fruit Market. Established way back in 1913, the market was recognised as a Grade II Historic Building in 2009, and many of the buildings in the area --despite many additions and renovations, still retain their original facades from back in the day.

To quote Chef Vicky, “if only the walls could talk”, as a trip to the market is like a trip back in time, with all the historical architecture and the Yau Ma Tei Theatre right across the street. The market is at its busiest during the early hours of the morning when fruits pass in and out of the market for delivery and is definitely the best place for a chef such as Vicky to find inspiration for her dishes.

Speaking of inspiration, chefs also find this in the meals that they eat. After the trip to the market, Chef Vicky and Debbie take us to Lau’s go-to for claypot rice, and the restaurant she would always bring visiting friends to when in the country. 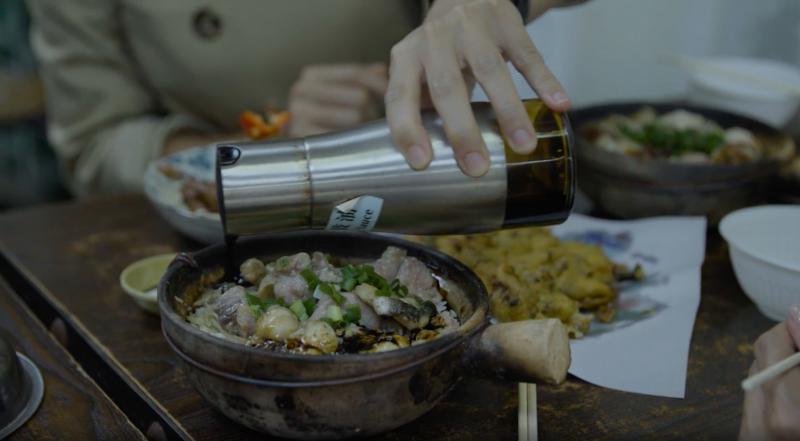 On Temple Street lies restaurant Hing Kee Claypot Rice, home to over 60 variations of the comfort dish for over 40 years. Learn a little about the traditional comfort food from Chefs Vicky and Debbie before being treated to a front-row view of Chef Vicky’s skills at Tate Dining Room.

Every chef has their own secrets to making their food taste the best. From ingredients sourced specifically from local markets to knives welded by the most talented craftsmen, the journey of one’s meal from its conception in a cook’s head to the plates on your table is a long and hearty one. 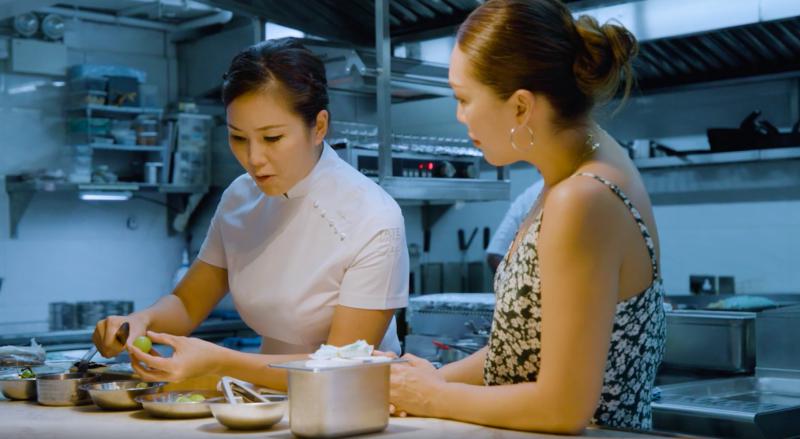 Find out what Chef Vicky has cooking in the kitchen and more about the unique Yau Ma Tei in HKTB and Michelin’s new series “Hong Kong Chefs’ Playbook”, premiering on 21 September on @DiscoverHongKong and @MichelinGuideWorldwide on Facebook.

To watch the video of Yau Ma Tei with Vicky (Tate Dining Room), please go to: